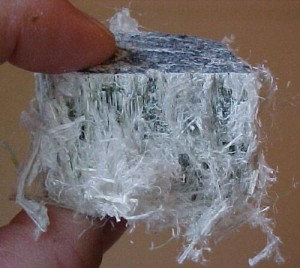 Asbestos kills over 100 people every year in Australia and the dangers are ever-present as materials degrade and old properties are demolished or renovated, often releasing asbestos fibres which are known to cause the deadly cancer, mesothelioma.

Asbestos was commonly used in construction until 1987 and was not restricted to fibro housing. It can be found in one of three Australian homes, anywhere from cement floors, walls, ceilings, fences, sheds, as building insulation, around pipes and buried in the ground by previous builders.

According to CEO of the Asbestos Safety and Eradication Agency, Peter Tighe, 97 per cent of asbestos in Australia is non-friable – meaning that it is bonded with an agent such as cement and so may not be immediately dangerous.

However some materials are up to 50 years’ old and are degrading. “The bonding agent breaks down and once that happens you can have a situation where the asbestos fibres become friable if they haven’t been treated and managed properly,” Tighe said.

Friable asbestos is any material containing asbestos that is in the form of a powder or can be crumbled by hand pressure. “Air blowing past friable asbestos will disrupt the fibres,” Tighe added.

He stated that any demolition or other disturbance of either friable or non-friable asbestos was fraught with danger. “If you drill or cut bonded asbestos that’s when it releases fibres into the air,” he said, adding that sledgehammers and hammers are particularly dangerous.

If you do decide to remove 10 square metres or less of non-friable asbestos, you absolutely must take every precaution possible urges Product Development Manager of ProChoice Safety Gear, Brad Rodgers.

“The big one is respiratory,” he said, saying ProChoice’s Half Mask Respirator with P2 Filters would offer the required protection in most cases of non-friable asbestos handling, as would disposable P1 or P2 rated masks.

“Cover as much of the body as possible, specifically the head: eyes, ears, nose. Use a disposable coverall with Type 5 particle protection and a chemical style of glove that has a full seal against particle transfer.” “All your clothing has to be disposed of after use,” Rodgers added.

Asbestos waste can only be disposed of using an Asbestos Control Plan that eliminates the release of airborne asbestos fibres. Asbestos material must be kept wet to reduce fibre release and stored in double-layered 0.2mm polythene sheeting or bags labelled “CAUTION ASBESTOS” and disposed of at designated locations.

If you do ingest asbestos fibres they can remain there, seeding mesothelioma, a cancer that develops in the lungs between 20 and 50 years later.

“If you are diagnosed with mesothelioma it is a death sentence. Once a tumour starts they are very very aggressive,” Tighe said.

If you are diagnosed, you can expect to have around 10-12 months to live.

As the Asbestos Awareness Month website says, people need to stop playing Renovation Roulette, it is not worth the risk.